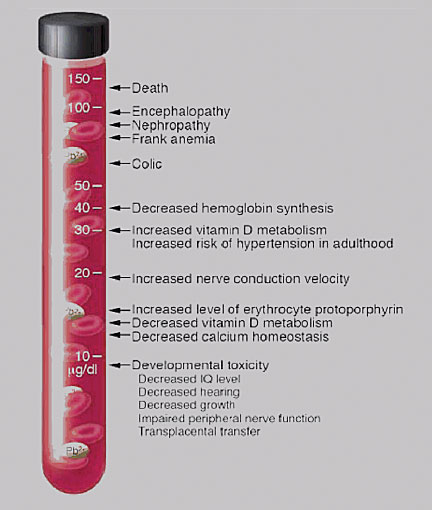 There is no known identified safe BLL. Exposure to lead can seriously harm a child’s health. Millions of children are being exposed to lead in their homes, increasing their risks for

Between 2008 and 2010, CDC and its state programs helped reduce the number of children ages 1-5 with blood lead levels ≥ 1 μg/dL by nearly 3 million, saving $26–57 billion in lifetime productivity earnings alone. These estimates do not account for behavioral and other adverse effects on lifetime productivity linked to lead exposure, such as attention-deficit/hyperactivity disorder, juvenile delinquency, criminal behavior, and an increased need for special education.

Lead poisoning can affect virtually every organ system in the body. Signs and symptoms of lead poisoning in children include:

Lead has no essential role in the human body, and lead poisoning accounts for about 0.6% of the global burden of disease. Lead poisoning is entirely preventable.

Intense, high-dose exposure to lead causes acute symptomatic poisoning, characterized by colic, anaemia, and depression of the central nervous system that may result in coma, convulsions and death.

A recent cost–benefit analysis undertaken in the United States found that for every US $1 spent to reduce lead hazards, there is a benefit of US $17–$220. This cost–benefit ratio is better than that for vaccines, which have long been described as the single most cost-beneficial medical or public health intervention.

Today, on the basis of multiple studies in several countries, it is estimated that about a quarter to a half of an IQ point is lost for each 1 μg/dl increase in the blood lead level during the preschool years for children the decrement in lifetime economic productivity associated with each lost IQ point is 2.4%.

The neurobehavioural changes associated with early exposure to lead appear to be persistent and irreversible When revised estimates of the burden of disease were made in 2004, 16% of all children worldwide were estimated to have levels above 10 μg/dl (WHO, 2009). Of children with elevated levels, an estimated 90% live in low-income regions. The total burden of disease attributable to lead amounts to about 9 million DALYs.

An analysis of the direct medical and indirect societal costs associated with lead poisoning in children in the United States found these costs to amount to US$ 43 billion annually.

Children between the ages of 1 and 3 who live in low-income housing built before 1978 are especially at risk.